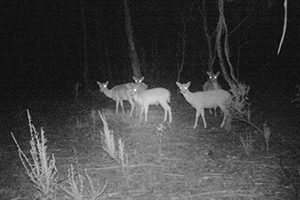 Thirty thousand hectares of public and private property between the Lerderderg State Park, Werribee Gorge State Park and the Brisbane Ranges is the target of a large-scale pest plant and animal control project.

The three year project being led by the Grow West program is working to protect and enhance threatened plants and animals in Melbourne’s west by creating a nature corridor between the reserves.

The nature corridor will provide a life-saving boost to these iconic species by expanding their habitat and helping them adapt to environmental change.

During its first year, the project has achieved the following successes:

Works were completed by Trust for Nature and Parks Victoria, with the support of the Port Phillip & Westernport Catchment Management Authority.

The project is a collaboration between government organisations, local councils, landowners, Traditional Owners and Landcare and Friends of groups and is funded by the Victorian Government’s Biodiversity On-Ground Action grants program.

The project complements and enhances works already carried out by local landholders and community environmental groups and is working towards achieving Grow West’s vision to connect the three large public land reserves.

“This important conservation program is helping protect these special places from the potential serious impact of invasive and feral species.”