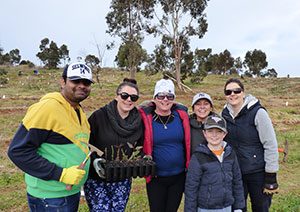 The annual planting day is one of the Grow West’s biggest events and is an important opportunity to rejuvenate and restore local landscapes. Over the past 13 years, Grow West has worked with thousands of volunteers and hundreds of landholders, who have helped plant over a million trees in the Upper Werribee Catchment.

In addition to the 6000 trees planted on the day, another 1000 were planted by school students on Thursday 20th July, meaning the planting goal of 7000 was reached.

Telford Park is a 16 hectare park, named after its last private land owner, William Telford, who died in 1928. It was a landfill site during the mid-20th century and while some revegetation has occurred since then, more native vegetation is required to prevent erosion affecting local waterways and to help the site become a refuge for native fauna.

The event was funded through the Greening the West – 1 Million Tree program which is supported by the Australian Government’s 20 Million Trees Programme (part of the National Landcare Programme).